My blog post today was supposed to be all about my exciting news that I've signed up with the Kate Nash Literary Agency. I'm now represented by the very lovely Sarah Taylor and thrilled to be working with the agency.

However, over the last few days things have been a bit tense at home as my little guinea pig, Roger, had to have surgery to have one of his eyes removed. The eye became infected and quickly escalated to the point where antibiotics wouldn't help and he would need surgery. Surgery is always risky on such small animals but we felt that we had to do everything we could for Roger.

So yesterday he went under the knife and had his eye removed : ( I was terrified that we'd lose him but I'm pleased to report that he's now home and well and stuffing his face full of hay and cucumber! He's bounced back to his cheeky old self and I'm in awe of how brave and resilient such a little creature can be!

Rollo has been camped out by his hutch all afternoon as he's equally delighted to have the little guy back with us.

Life has been tough for Roger, he lost his life long companion, Don, at the start of the year but refuses to let anything get him down. So today, my agency news has been overshadowed by Roger's outstanding bravery! He's such an awesome guinea pig and I'm so happy he's back home! He now just needs a pirate name to match his new one eyed appearance... 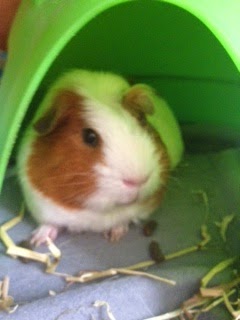