Currently the second book in my Avalon series, Second to Cry, is on offer for £0.99 and excitingly the next installment in the series, Third to Die, will soon be released as the book is now available for pre-order on Amazon and will be out on 10th January next year!

So if you're getting a shiny new Kindle for Christmas you'll be able to load it up with the whole series so far!

And ahead of Third to Die's release I can share it's brand new cover below; 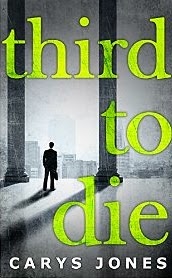 
I love the bright pop of colour on the cover and of course Aiden, standing as always alone contemplating his next move...

I am beyond excited to share this book with everyone as I personally feel that it charts Aiden's greatest adventure in Avalon so far! So pre-order and have something to look forward to in the new year when Christmas lights have faded and everything seems so gloomy. I promise that the book will be the perfect post Christmas pick me-up!

So what does Third to Die have in store for Aiden? The title contains a clue...